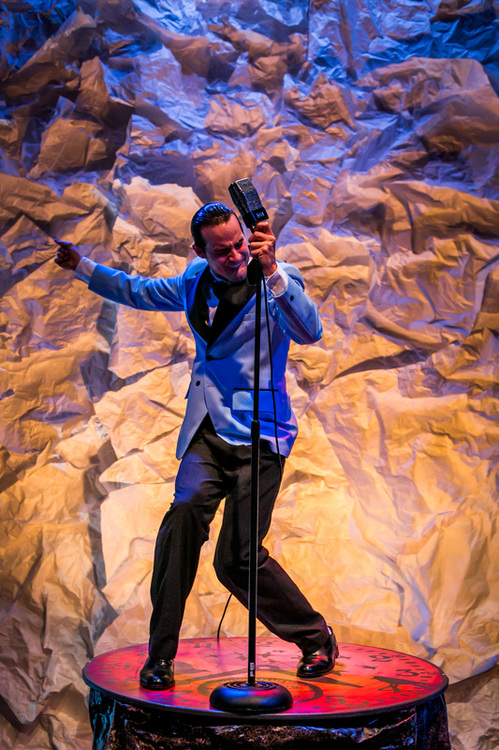 "A human being should be able to change a diaper, plan an invasion, butcher a hog, conn a ship, design a building, write a sonnet, balance accounts, build a wall, set a bone, comfort the dying, take orders, give orders, cooperate, act alone, solve equations, analyze a new problem, pitch manure, program a computer, cook a tasty meal, fight efficiently, die gallantly. Specialization is for insects."-Robert A. Heinlein

Jesus Christ I hate writing publicly about myself. If this was a journal or some thinly veiled monologue about personal identity, it would be a walk in the park; however, openly discussing myself as in an extended actor biography is just, well, weird.

Sure, I mean, there's the whole argument about acting is atually about revealing truth, not hiding it: but hell, half the acting projects out there on the market are about how amazing some product is that you've (the actor) never tried, not that I would do such a thing...

Alas, here we are. I’ve lured you in with a touch of self-deprecating humor and now we must actually get into the nit and gritty because you genuinely need to know something about me. Well, in that case, I am an actor on stage and screen, writer, screenwriter, blogger, voice artist, playwright, salesman, marketeur, and artist who over-estimates his own abilities. Still, whether it is ego, vanity, or just plain gusto I’ve managed to carve out a creative career.

I’ve written plays for various theatre companies including children’s theatre pieces such as Storytime! Peter Pan, Storytime! Snow White, Captain Garbage The Three R’s of Recycling as well as other adults pieces like The Complete Tales of Edgar Allan Poe, Treasure Island, and The Complete Casebook of Sherlock Holmes.

Additionally, I’ve penned corporate screenplays for clients such as Facebook and the University of Michigan Ross School of Business. Occasionally, when not motivated by financial gain, I write things for myself such as the plays Sherlock Holmes and the Case of the Necronomicon, The Ballad of Scaramouche, Irene Adler and Her Majesty’s Secret Service, Blood on the Knockers and the feature films The One that Got Away, True Crime: Hunt a Killer, Happily Married, and Rockabilly 666.

As an actor, I will gladly work for money. I’ve appeared in over 200 commercial projects from Wegmans and Giant to spokesperson work for corporations. We don’t have patrons anymore, therefore hire me so I can do the silly things like verse in the park on a hot summer day. Feature films and theatre fill the creative itch. Working on projects such as The 39 Steps, Treasure Island, The Servant of Two Masters, Or,, Bullshot Crummond, or any com media/farce fills me with the utmost joy as does an Agatha Christie murder mystery or a swashbuckling adventure play. Luckily, be it by genuine interest or academic bluster Shakespeare still fills summer theatre and regional houses everywhere, and I’ve been afforded the opportunity to perform in many of them including Taming of the Shrew, Much Ado About Nothing, Hamlet, Macbeth, Coriolanus, Comedy of Errors, and Two Gentlemen of Verona.

I've learned to play the fool. It suits me. Anyone who acts and believes otherwise is truly a fool, but who is more of a fool, the fool who knows he's a fool or the fool who thinks himself a hero? Being foolish enough to think he could make it as an actor, I set out on a  journey that led him across America. Along the way, I discovered just how much of a fool I was.

I am an actor, voice-actor, improviser, writer, playwright, screenwriter, copywriter, producer, salesman, and make a damn fine Martini. I have a pension for all things Bruce Wayne and James Bond, as well as a deep love for the great detectives Sherlock Holmes and Hercule Poirot.

My whole life I've enjoyed stories: comic books, novels, audiobooks, movies, plays, you name it. It seemed fitting to follow in the footsteps of Hemingway, Hunter S. Thompson, and Trevanian and learn the craft of storytelling; however, it wasn't just the written word that intrigued me. Comedians such as Jim Carrey and Robin Williams could at one instance delight and entertain you and at another break your heart.

Therefore, I wanted to learn to write, to create, to speak, and to entertain. And for the past ten years, I haven't shut. up.

The short and skinny of it is I like to make people happy. I love to tell stories. On the stage or on the page the craft of storytelling fascinates me.

As a professional, I have worked all over the United States in film, tv, digital, and live performance as well as behind the bar and in front of a computer.

I am a proud alum of Darton College where I played baseball in college and first studied theatre, as well as a honors graduate from Georgia Southern University with degrees in both Theatre and Performance as well as Journalism and Communications. I got my B.A. in B.S.

At Southern, I appeared in over twenty productions, was President of the student organization Theatre South, maintained the public relations and marketing department of the Theatre and Performance program, wrote and shot video for the Statesboro Herald as well as The George-Anne Daily. Southern will always hold a place in his heart, as it was the opportunity to fall in love with performing again.

Since college, oh god it was so long ago, I've worked across the United States in just about every medium. My first role was as as the lovable, self-indulgent antagonist Christopher "Kit" Marlowe in Central PA. Since then I've performed as a clown in Kerrigan and Lowdermilk's "A Flash of Time" for the 2013 PIFA festival, improvised Murder Mysteries and Dinner theaters in the Tri-State area, and drank the night away with audiences in "Bye Bye Liver." While in Philadelphia I have educated and improvised for children with the Garden State Discovery Museum, introduced young adults to Shakespeare with the Philadelphia Shakespeare Company, and devised works and plays with local companies and playwrights. Philadelphia has been and continued to be a place of growth for me as I learns the ins and outs of the business of theatre and the craft of acting.

After touring for the summer, Brock was accepted to the fellowship program at the America's Oldest Repertory Theatre Hedgerow Theatre.  He has been seen as Fred in A Christmas Carol, jumped into the many roles of the Storytimers! with the characters in Peter Pan or Pinocchio, as Willoughby in Jane Austen's original novel Sense and Sensibility, and the villainous Julian in Alan Ayckbourn's Communicating Doors.

Favorite roles at Hedgerow include Bullshot in Bullshot Crummond, Man in On the Verge, Charles II in Or,, Florindo in Servant of Two Masters, and the Fool in Don Quixote. While at Hedgerow I wrote and performed two interactive children's theatre pieces, Storytime! Snow White and Storytime! Peter Pan, as well as adapted Tales from Edgar Allan Poe and The Hound of the Baskervilles. This work has given way to three new plays being produced in 2019, Blood on the Knockers, The Ballad of Scaramouche, and Irene Adler and Her Majesty’s Secret Service.

In Philadelphia, he has worked with Shakespeare in Clark Park, the Lantern Theatre Company, Senior Stage, Open Hearts on Tour, Quintessence Theatre Group, and the Eagle. Across the U.S. he has performed with American Stage, Capital Stage, Rehoboth Summer Repertory Theatre, the Texas Shakespeare Festival,  and Annapolis Shakespeare Company.

I've played the villainous roles of Macbeth and the Commendador as well as the hopeless Benedick and Richard Hannay. In 2020, I was set to play Oberon and Long John Silver as well as shoot several films...but, you know.

Now, I am experimenting with. new mediums. I've written, produced, and starred in several short films, made bank with regional and national commercials, recorded audiobooks, created content for companies, managed a marketing team, led a sales team, and do so much more.

The work never stops and a new challenge is always on the horizon.

Theatre has taught him the importance of the mastery of craft and the power of the company. Acting is nothing more than the examined life; and the real magic onstage exists between the interaction of the people. The art that happens between two actors, two players, two people living in the moment, is a beautiful thing. Every chance to play, every opportunity to perform, every moment to live is a gift, and the fact we are allowed to entertain should not be wasted.